By Dr. Shruti BhattacharyaAugust 18, 2021Updated:April 17, 20225 Comments10 Mins Read psychology
Share
Facebook Twitter LinkedIn Pinterest WhatsApp Email Telegram
So you have decided to train your dog using a shock collar. Have you considered the types of shock collars available in the market?

The first part of dog training is to decide which method to use. Now that you have decided that you will use a shock collar for training, the next thing to figure out is the types of shock collars which are available in the market and which collar is best suited for your pup?

PS: I personally do not advise or advocate the use of shock collars! I feel these are torturous devices and must be banned worldwide. No certified dog trainer will ever tell you to use shock to train your dog!

Before you start going through the types of shock collar, you need to understand:

What is a shock collar?

A remote training collar or shock collar as it is commonly referred to, belongs to a family of dog training collars. There are various types of shock collars and they mostly deliver an electrical signal or vibration tones of varying intensity to the dog’s neck. Some trainers also use the shock collar on other parts of the dog’s body like the belly region or the genitalia. This is done to achieve the desired training effect.

Some types of shock collars like the electric shock collars also come with internet mapping capabilities as well as GPS to help the guardian look for the dog in case the dog gets lost. 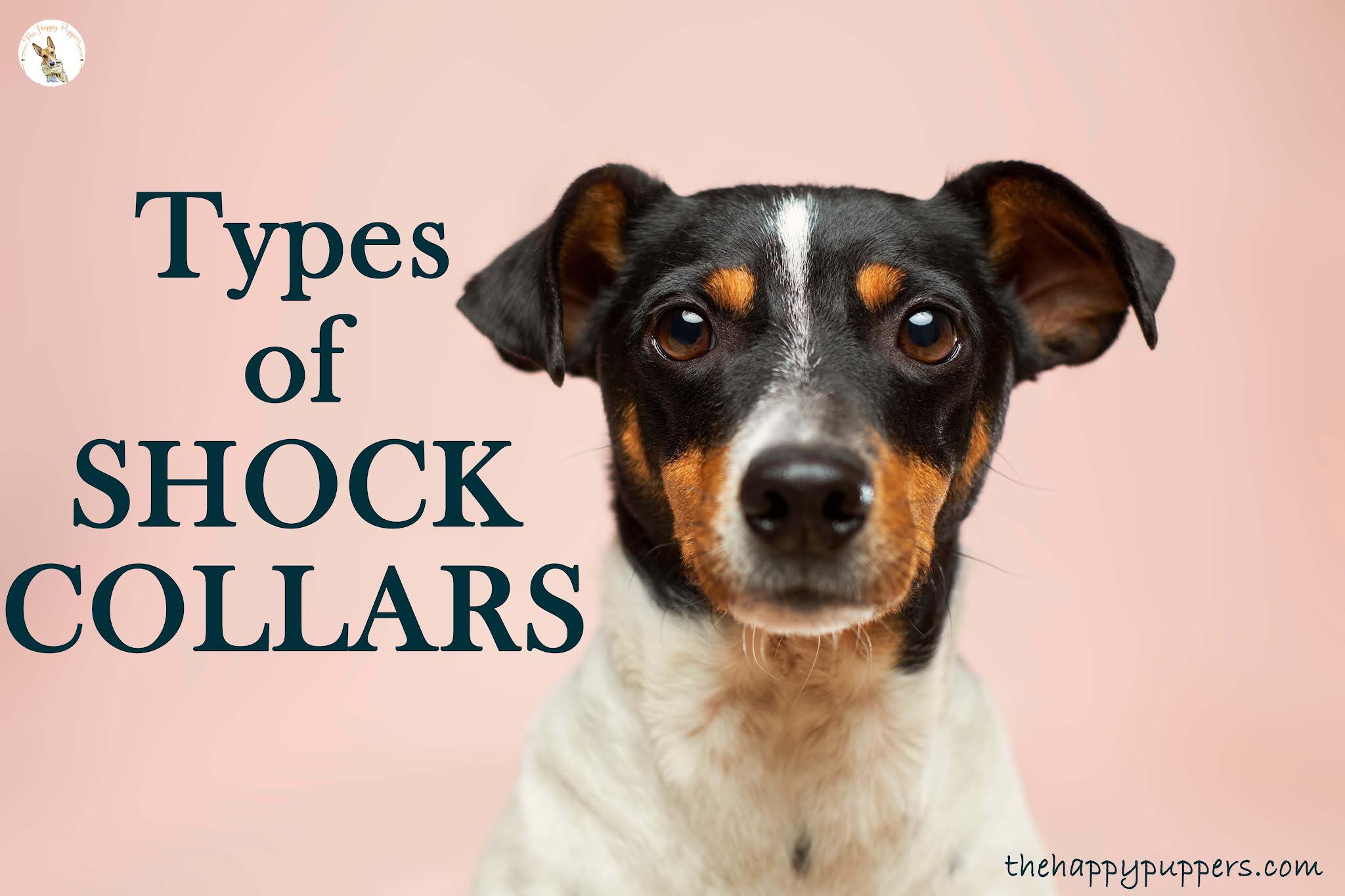 When were shock collars introduced?

Shock collars were first introduced in the 1960s for the purpose of training hunting dogs. These early collars are used to deliver very high levels of electrical impulses to the dog.

Back then, these types of collars were used to train dogs and to keep them in control even if they were far off running behind a prey. Back then, dog training was at its most aggressive. The guardians didn’t care how much shock or pain the shock collar delivered as long as the collar got the job done.

Off leash training: tips and tricks
In the current scenario, most modern types of dog collars deliver comparatively very low levels of shock. Shock collars are now available which can be used for applications like obedience training, pet containment, behavioral modification and finally police and military training.

How does a shock collar work?

A shock collar contains two electrical points which are in contact with the dog’s neck. Therefore, when the guardian activates the collar, electrical stimulation is delivered to the dog through those two electrical points in contact with the neck. The newer types of shock collars are coming with a sound feature along with the shock. The purpose of the sound is to give a warning to the dog that if the unwanted behavior is not stopped, a shock will be delivered. Dogs being the super smart creatures that they are, they quickly realize that shock follows the beep. Therefore, after a few uses, only the beep is needed to curb the unwanted behavior.

As I mentioned before, shock collars are generally used by people to curb unwanted behavior in dogs ranging from food aggression to excessive barking. The shock collars are also used to train dogs to stay within the property line or to stay close to the guardian when they are off leash.

Your training methods can make or break your dog

Most of the types of dog collars available currently come in many different types of enforcement as well as different levels of stimulation. This allows you to set the level of electrical stimulation or vibration you wish to deliver to your dog. Furthermore, many shock collars come with a warning beep or vibration before the actual shock is delivered.

When the beep or vibration occurs, you can pair it up with a verbal command like DOWN or NO to further disrupt the unwanted behavior. Your dog knows that a beep or vibration would be followed by a shock. Therefore if you say ‘no’ or ‘down’ with the vibration or tone, it may deter the dog from engaging in the activity you don’t want to avoid getting shocked.

Most dog guardians prefer to opt for the type of shock collars which do not have the shock feature. These are considered to be the kinder and more humane option. These types of non-shock collars work on administration of two different kinds of stimuli which is a vibration and a beep. The beep is used as a warning to the dog to stop the unwanted behavior. If the dog still does not stop the unwanted behavior, then a vibration is used to deter them. The vibration is uncomfortable to the dog and is most likely to snap him or her out of the activity he or she was indulging in.

This is the most common type of shock collar used when guardians want to keep their dog within the fence without actually putting up a fence. This shock collar is mostly used in places where the local home owners association or laws prohibit the construction of a Fence around the yard.

To use these types of shock collars, first a ground installation is done of a wire system which connects to the collar. As the dog tries to cross the perimeter line, the dog is delivered a warning sound which advances to delivering a shock in case the dog does not follow the warning sound. This is to keep the dog inside the property without a fence.

Dogs have sometimes shown behavior like barking excessively when the guardians cannot figure out the stimulus. Unfortunately, there are also those dogs who in general bark a lot compared to others. If you are a guardian for such a dog, you might look into barking collars. A barking collar sends a mild electrical shock to the dog’s neck when the dogs neck signals a loud vibration as a result of the incessant barking. The barking collar comes with different levels of vibration and shock settings which can be preset to the acceptable barking levels.

Training collars are normally operated by a hand held device like a remote. These training collars come with a large variety of functions and levels. They can give a varying duration of stimulus to the dog. They also come with varied vibration functions which can be used to gain the dog’s attention. The specific purpose of using this type of shock collars is to target the misdemeanor or aggressiveness of the dog. The shock intensity is adjustable and can be set to a specific range depending on the guardian’s choice.

To go with a dog training collar or to not go with the collar?

A study done in the year 2012 and published in BMC veterinary research Post on the experience of people using equalities and people using the reward-based training methods for their dog in UK. 3.3% of the dog guardians used remote activated totes of shock callers in the group, which is a fairly low percentage. Furthermore, it is observed that the dogs responded better to the treat reward-based method compared to the method which involved the use of shock collars. It was also observed that the guardians who attended puppy school were more inclined towards using treat-based training compared to shock collars. Shock collars were mostly used by guardians who did not attend or get any training in how to manage the behavior of their dogs.

I have never been an advocate of using negative training methods for training dogs. These methods may be effective for a short while but they are not a good option for a long term training. You should try to bond with your dog instead of trying to control him or her with the different types of shock collars. These will make your dog fearful towards you. It may even lead to an increase in aggressive behavior from the dog.

However if you feel that your dog is growing in aggressiveness and you need a collar to train him or her, try to go with the lesser traumatizing options like the non shock collars? Yes! There are collars which do not deliver shock to the dog but may be equally effective in training your dog. These are generally spray collars, vibration collars, citronella bark collars, ultrasonic collars etc.

No certified dog behaviorist will even give you the option of going for the outing collars, shock collars or choke chains. Even after all this if you decide to go for a shock collar, go the mildest one possible. Start to use it with the lowest setting. Use it first in your own neck or wide to get a feel of what your dog would feel when you administer the same type of current to him or her.

If you think the neck of the dog is sensitive, imagine how sensitive would the genitalia or the stomach be? Dogs have fur in the neck which provides them with a modicum of protection. The genitalia and the stomach regions have very less hair. The shock might be more effective but it will hurt the dog more as well. Therefore, if you have decided to opt to train by the use of collars for dogs, kindly use the collar on the neck only.

Shock collars are not the solution to any of the dog behavioral problems. They may provide you a quick fix, but scientific studies have shown that shock collars destroy the dog’s relationship with his or her guardian, makes them fearful and possibly more aggressive than before.

There are schools of thoughts which say that a shock collar can be a good addition for training your dog, But, it needs to be used in the right manner. If shock collars are used in the wrong manner, they will cause more harm than good. Thus, if you decide to use a shock collar, use it with consideration