Never use shock collars for training

Shock collars are also known as remote training collars or e-collars. These collars comprise of two metal prongs which are placed on the inside of the collar. When the collar is put on the dog, the metal prongs come in contact with the dog’s neck. Some trainers prefer to use the shock collar against other parts of the dog’s body like genitalia or belly. When a button is pressed on the remote, it sends a shock to the metal prongs which are in contact with the dog’s neck. Most veterinarians and dog trainers do not support the use of shock collars for dog training. 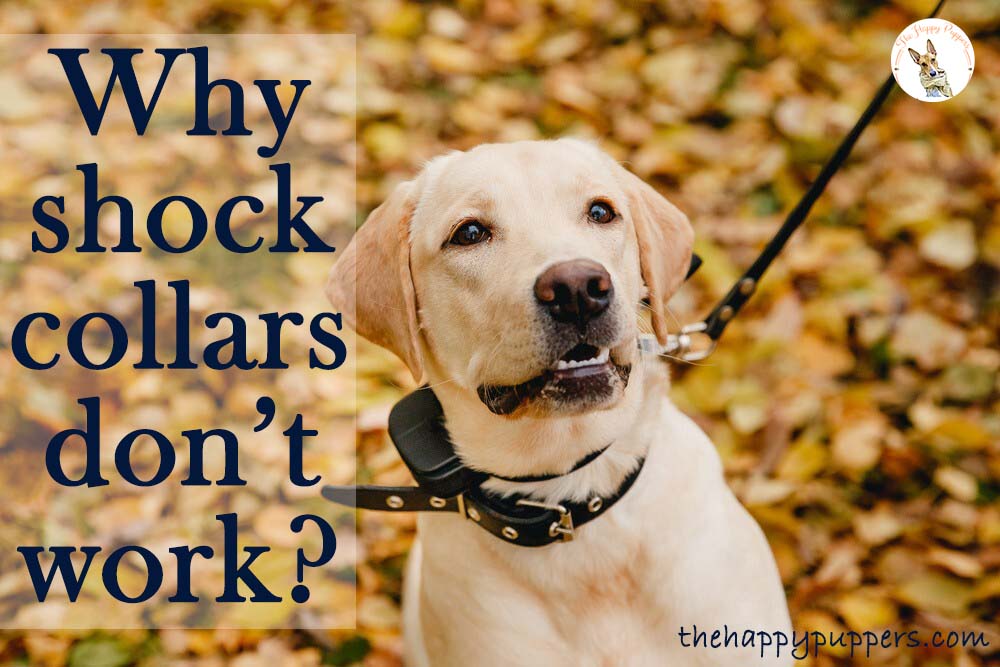 Most of the dog behaviorists and trainers prefer to use the positive reinforcement method which involves giving treats to the dog in return for a favorable action. You ask the dog to sit. If the dog sits, he gets a treat. Over time, the dog understands that if he wants a treat, he has to sit when you ask him to sit. Eventually the command converts into muscle memory in the dog and the dog sits on asking without you offering him or her a treat.

However, some trainers opt to go for negative reinforcement to train dogs. In this case, first the command is given to the dog. Following this, an electric shock is delivered. The trainer stops the electric shock only once the dog does what is required of him. Dogs being the smart creatures that they are, they soon realize that they must follow the commands and do specific actions when specific commands are said to avoid getting shocked.

A lot of trainers also use shock collars to deal with nuisance behavior in dogs like lunging at other dogs or people, excessive barking etc. According to the trainers, shock collars can be used to stop these behaviors via the method of positive punishment. In this case, the electric shock is administered after the behavior is conducted. This teaches the dog to stop lunging, barking or snarling in the future because the dog is scared that he or she will be shocked again. This is the biggest side effect of shock collars. They have a negative effect on the psyche of the dog.

This type of training method alters the dog’s underlying psychological and emotional state. The dog will stop lunging and barking and will follow the command, but the dog is now scared of being shocked. Such shock collar side effects can lead to increased aggression in the dog or lead to formation of a dog who is always afraid and never comfortable.

Now that you know which type of training methods the shock collar pertains to, it is time to understand why shock collars don’t work!

Shock collars come under the method of aversive dog training. These can also be used to train dogs to stay within the property line in case of those houses where putting up a fence is not allowed.

This is the biggest and the most obvious of the shock collar side effects. Most of the dog guardians cannot imagine causing pain to their dogs. Most dog guardians view their dogs as their kids and do not want them to be in any pain. Even though the shock collar comes with a variety of shock settings from low to high, a shock is still a shock at the end. I cannot even imagine buying a shock collar, much less use it on Delta!

People who use shock collars to train their dogs believe that fear is a motivator. However, fear in case of dogs can be very dangerous. You should never try to train a dog by inducing fear. With the process of shock training, dogs learn to associate certain situations, objects or people with the collar. They start to believe that presence of these circumstances or situations will lead to them getting shocked.

For example when shock collars for barking are used. They will shock the dog when he barks. Eventually the dog will associate barking with getting shocked. Therefore, he or she will try to restrict barking as much as possible. This is one possible result.

How to introduce your dog to a new pup?

Collars which are used to reduce excessive barking focus on the vocal vibration of the dogs. These collars may deliver the shocks more than necessary and at times when it’s not even needed. This unnecessary negative reinforcement will confuse your dog. As a result, the dog may not understand what the shock collar was initially used for. This may even hamper the training you have already given your dog.

No availability of positive reinforcements

Shock collars do not tell your dog that he was a good boy when your dog did something good. They also won’t offer treats or toys to your dog or pet him on the head. Therefore, even though a shock collar may be successful in preventing the negative behavior from your dog like running after the mailman, jumping on guests etc., it does not reward your dog for the commands he obeyed like sitting patiently.

Dogs are affectionate creatures. They follow commands because they like the affection that follows. If there is no affection or positive reinforcement, it will hamper your dog’s psyche. Your dog may even stop following the commands later. Therefore, shock collars don’t work when it come to good training practices

Shock collars are not as effective as human training

This is the point which I am most passionate about amongst all the reasons as to why shock collars don’t work. When you train your dog, you not only give him instructions to follow, you forget a bond between you your dog which is something that a shock collar cannot do for you. Shock collars will not only cause psychological and emotional distress to your dog, it will also distance your dog away from you. Fear is never the solution in training.

You love your dog

For most dog guardians, the dog is either like their child or is their child. Would you subject your child to a shock collar if your child is not listening to you? If you wouldn’t do this with your child, why would you do this to your dog? Dogs are like toddlers who will never grow up. If they receive a shock in return for their undying love, trust and loyalty, imagine how would they feel? Dogs are more sensitive than they are mostly given credit for. So please understand your dog and do right by him or her. Yet, another reason why shock collars don’t work.

15 amazing ways to celebrate special occasions with your dog

Experts advise against it

Almost all dog behaviorist and dog psychologists say that shock collars don’t work.. Punishment-based training has been recognized to be detrimental to animals. Therefore a lot of dog psychology associations strongly advise against such training strategies. In a lot of countries, these kinds of shock collars are even banned.

There is always a better way

By now you know why shock collars don’t work. You want to train your dog, that’s amazing. However, you do not need a shock collar to train your dog. All you need is a little bit of patience, lots of treats and time on your hands. Your dog will not only be on his or her best behavior. In the absence of shock collar, nothing will get in the way of his or her undying love and affection for you.

2021 resolutions for all dog guardians

Honestly, if you have read the article till this point, you already know the answer to this question. Shock collars are already banned in several countries. To answer this question, ‘are shock collars cruel’, I ask you to take the collar, touch it to your wrist or even better, your neck and press the remote. No action or words will answer your question better than you yourself testing it out. 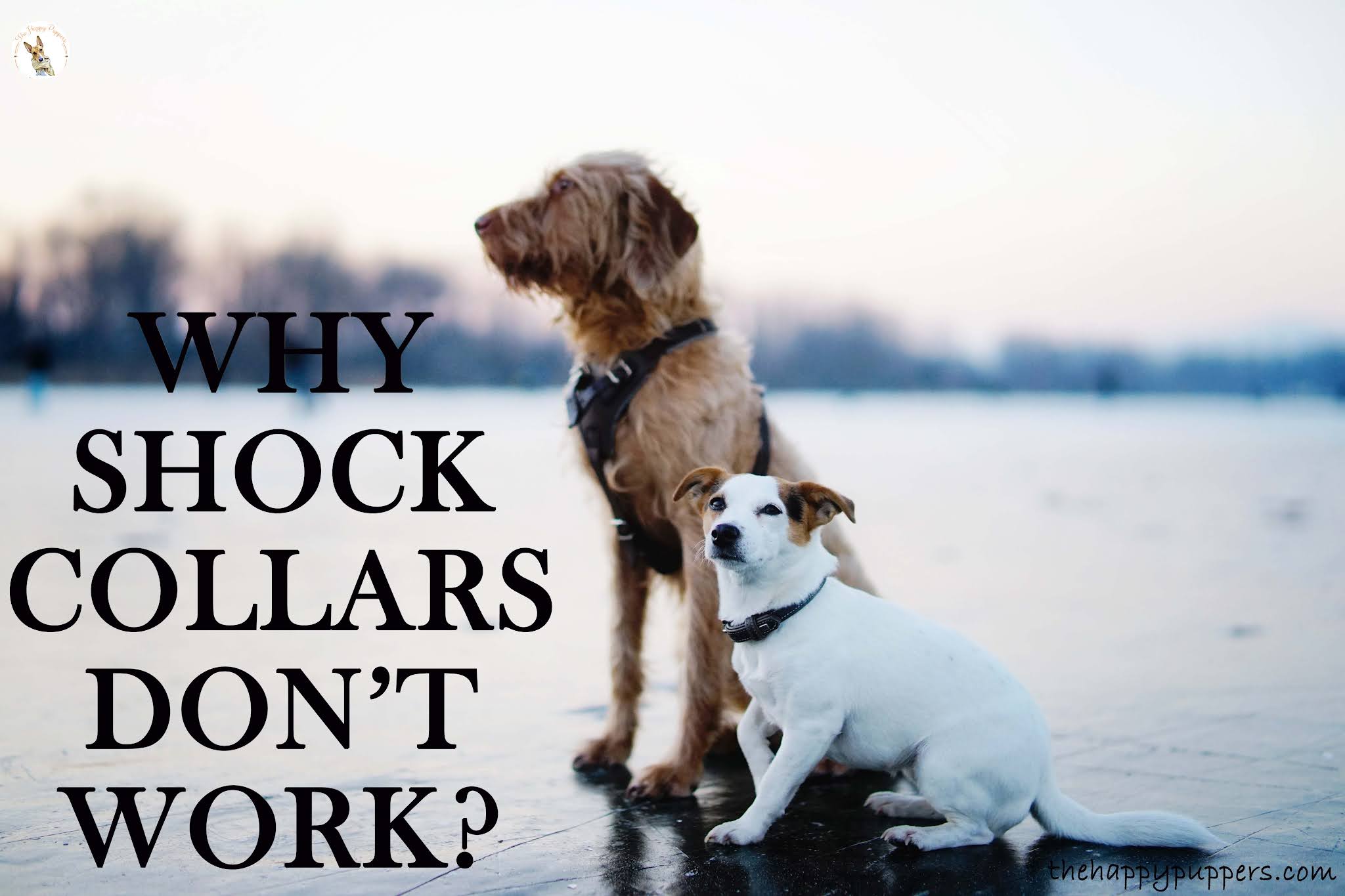 Yes, Try touching the collar to your wrist and press the remote. You will know whether shock collars are cruel or not.

Are there shock collars for barking?

Yes! Such shock collars can be preset so when the dog barks beyond a certain duration, the collar will administer an electric shock to the dog to top him or her from barking. I strictly advise against shock collars.

What’s the problem with using shock collars on dogs?

Shock collars rely on aversive training methods to train the dog. These methods use punishment as reinforcement in dog training. Not only are these methods ineffective at dog training, they also cause physical and psychological harm to the dog.

Are shock collars illegal in the US?

Actually, shock collars are not illegal or banned in the US. Authorities have not found substantial proof against shock collars to get them banned.

How many volts does a shock collar generate?

A shock collar can generate anything between 1500 to 4500 volts depending on the settings you choose.

Yes. Shock collars cause physical and emotional trauma to the dog.