After fleas, ticks are the worst problem any dog guardian can face. Ticks are not only a nuisance; they can also take your dog’s life or cause paralysis if not treated at the right time. If the dog is not on preventive medication, he or she might be left completely paralyzed or worse in case of a tick bite. 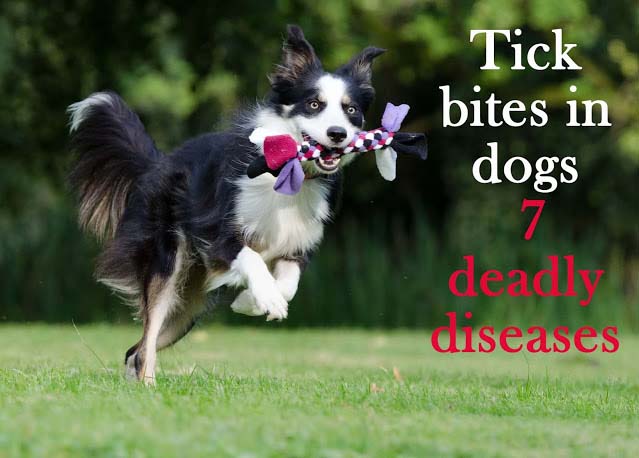 How does tick bite work?

When a tick bites you dog, it attaches to your dog’s skin and feeds on his or her blood. Ticks are parasites of the hematophagous category which means blood is their food. Ticks tend to anchor themselves to your dog’s fur and keep sucking the blood till they are filled with blood completely. To be able to transmit the disease, the tics have to remain attached to the dog’s skin for at least 24 to 48 hours. However, in case of certain diseases, the transmission may happen within a few hours of the tick’s attachment to the dog’s body.

Ticks may also cause tick paralysis in dogs which is a deadly disease. Tick paralysis is caused by the production of neurotoxin from the tick’s salivary glands. The common symptoms of tic paralysis include elevation in blood pressure, muscle weakness and stiffness, vomiting and whole-body paralysis which may lead to the infected dog’s death.

Normally, diseases show symptoms similar to other diseases and this is what makes them harder to diagnose. When appendix in dogs pretesting as needed. If you suspect your dog is suffering from tick problem, consult your rate without any delay as tick diseases can be very dangerous to dog. Thus, to completely understand the importance of tick prevention in dogs, one first needs to understand why are ticks one of the most dangerous parasite to infect your dog.

The easiest way to keep your dog safe from any kind of tick bite is to stay informed off the outcomes often bites. Make sure to protect your pup from the following six most common tick diseases observed in case of dogs.

Let’s have a look at the different types of diseases caused by tick bites:

you must’ve heard of nine disease affecting humans, but did you know that that is a canine radiation off-line disease as well? Lyme disease is caused by the bacteria Borrelia burgdorferi. Lyme disease gets transferred to dogs by either the black leg tick (lxodes scalpularis) or the deer tick (a hard bodied tick native to North America). Transmission of this disease usually takes from 36-48 hours. This disease is mostly seen in dogs living in the Northeast, the Midwest as well as mid Atlantic.

most of the dogs were suffering from canine lyme disease do not show any kind of identifiable symptoms. The dogs who do display the clinical signs of Lyme disease, mostly show symptoms around joints and sometimes involve of the kidneys.

For the canine Lyme disease, the most common treatment of choice to go with are antibiotics. If the Lyme disease develops severe complications like affecting the kidneys, hospitalization and some supportive care will be needed.

How to prevent canine Lyme disease?

To prevent Lyme disease from affecting your dog, get your dog vaccinated with the Lyme vaccine. Depending on your dog’s health and your living conditions your red would be the right person to decide if your dog needs this vaccine or not.

this is another pretty common tickborne disease which occurs in dogs. This is mainly caused by the bacteria, Ehrlicia canis. The problem with this microorganism is that it can cause mighty systemic complication in the dog. This disease is mainly caused by the brown dog tick, deer tick and the American dog tick. The prevalence of this disease mostly in the Gulf coast and the southwest regions.

Signs and symptoms of canine Ehrlichiosis

since this disease tends to impact much reporting omens, the severity would depend on factors like the immune system status of the dog, the infection’s duration as well as the strain of the microorganism affecting the dog.

The primary clinical signs of this disease include:

the primary treatment of this disease also includes antibiotic. However, due to enlargement of my development, additional supportive therapy might be required depending on the status of your pup. It is best to go to your veterinarian as soon as possible if you’re suspecting your dog to be infected with this type of tick. The sooner the prognosis is done, the sooner the dock and report on right medication and to be on the road to full recovery. If the treatment is started late, there’s a higher chance of complications and difficulty in recovery.

This disease can be divided into 3 phases:

This phase is characterized by depression, wheezing, enlargement of the lymph nodes, fever and anorexia.

This is the phase where some dogs are able to completely eliminate the infestation of the ticks while the others may not be able to remove them.

This phase generally occurs 1-4 months post the main bite. The primary symptoms in this case include nosebleeds, inflammation of the joints, thinning, anemia, fever as well as neurological signs and symptoms.

so far there is no vaccination available for canine Ehrlichiosis. Therefore, the protection of your pup depends entirely on tick prevention methods.

These microorganisms are normally transmitted by the deer ticks and are most commonly seen in Northeast, Wisconsin, Minnesota as well as California regions in US.

Most dogs do not show any kind of symptom of anaplasmosis. Since the incubation period of this disease is a few weeks, the symptoms may become observable after a couple of weeks of the tick bite. The primary symptoms are:

Again, for canine anaplasmosis, the primary treatment is antibiotics.

since in this disease there is a chance of the dogs getting infected, use of the printed tick measures is extremely important.

A lot of dog guardians may have heard about the Rocky Mountain spotted fever. This is something disease which is caused by the bacterium known as Rickettsia ricketssia and is transmitted mainly by the brown dog tick and the American dog tick. Rocky Mountain spotted fever is an acute disease and generally tends to last for around two weeks. This disease is normally seen in south-central US and the southeast regions of the US.

Most dogs will suffer from Rocky Mountain spotted fever do not show the clinical signs. However, if your dog does show signs and symptoms of this disease, they will most include:

Dogs suffering from Rocky Mountain spotted fever may need hospitalization. The treatment for this disease mainly includes supportive care as well as antibiotic therapy. Since there might be cases of blood abnormalities, anemia as well as fluid loss, your dog may have to be hospitalized and kept under observation.

In serious cases, this disease can lead to internal hemorrhaging and lead to release of blood in the stool and urine.

Due to this being a zoonotic disease, there is a chance of the disease getting transmitted to the guardians from the dog. According to the Centers for Disease Control and Prevention (CDC), confirmed cases of human infection must be reported to the health department for documentation.

Babesia is a disease caused by parasites. The parasite attacks the red blood cells of the dog’s body. It is primary characterized by the occurrence of heomolytic anemia due to the collapse of the red blood cells. If not treated soon, babesiosis can be fatal for the poor dog. The transmission of this disease is mainly via blood transfusions (rare cases) or the exchange of blood during dog fights. However, the most common transmission mode is tick bites.

Clinical sigs of Babesiosis in dogs:

Treatment of Babesiosis in dogs:

Canine babesiosis is normally treated with antiprotozoal drugs. In some cases, antibiotics may be needed. Specific treatment would depend on the condition of the dog as well as the Babesia species which has infected the pup. Some pups may require a blood transfusion, IV fluids as well as hospitalization for a certain period of time.

canine bartonellosis is caused by the bacteria Bartonella spp. One version of this disease also affects humans and is commonly known as the cat scratch fever. In case of dogs, the microorganism which is responsible for the transmission of this disease has not been identified yet. However, ticks are the primary suspect of transmission.

This disease has been known to infect humans as well as cats along with dogs.

this disease needs treatment with either a combination of antibiotics or a specific antibiotic for at least a month. If proper treatment is provided in time, the prognosis is generally good and prompt. Since this disease falls in the zoonotic category, it can also affect the dog guardians.

Another reason why you must always focus on flea and tick prevention. To know more about fleas in dogs, click on this link. If you are looking for flea treatment and prevention option, then check out this link.

Tick and flea prevention can work wonders in keeping your dog protected and away from these diseases.

Canine hepatozoonosis is another tick-borne disease primarily caused by two protozoan species: Hepatozoon Americanum and Hepatozoon canis. This disease most commonly affects dogs who are already affected with another disease or suffer from a weak immune system. The most common symptoms of this disease include nasal secretion, thinning, muscle and bone pain, ocular secretion, nasal secretion and finally diarrhea.

Before administering any of the above-mentioned products, have a discussion with the right as to which one of these would be the perfect fit for your pup.

Preventing ticks infestation in your house:

There are many ways to prevent tick infestation in and around your house. You can prevent sticks from entering your yard by restricting the entry of animals will cause who bring in ticks along with them like dealers. You can also apply especially pesticides along the perimeter of your yard. One thing to be careful about over here is that these pesticide products may have their own environmental and health risks. So have a discussion with your vet before choosing a specific pesticide. Keep checking this blog as I will be putting up some more tick related posts which I’m hoping would help you out.

You are the best person to know what dog care strategy should you apply to keep your pup safe and healthy. The above blog post is not meant to scare you but to keep you informed about the risk that your dog might face. A few preventive measures may go a long way in your dog care routine and keep your pup healthy happy and safe. Let me know if you have any specific questions pertaining to this blog post. I will be happy to answer as many as I can.