Ticks can cause tick bite fever in dogs.

Most dog guardians have heard of Lyme disease caused by tick. However, have you heard of tick fever which can cause serious complication in your dogs?

Tick fever is also referred to as canine Ehrlichiosis. It is found worldwide and has been reported to be present in almost all the states of the United States. Canine Ehrlichiosis is mainly caused by a microorganism called as Rickettsia. Rickettsia is a bacterium which mostly behaves like a virus, i.e. It can use your dog’s body cells for the purpose of reproducing and living.

There are two primary forms of Rickettsia which are responsible for causing ehrlichiosis in dogs:

Ehrlichia canis: This is mainly transmitted by the Brown Dog tick and is also the most prevalent form.

Ehrlichia ewingii: This one is transmitted by the Lone Star tick and is less prevalent than Ehrlichia canis.

For an easy read I have divided the article into the following sub categories: 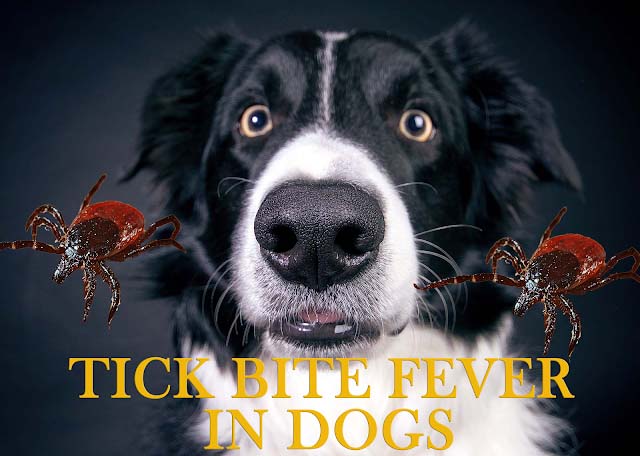 Check out these other articles which may be of interest to you:

How can your dog become infected by tick fever?

Ticks are basically like vampires. The tend to suck the blood and take up residence for a long time on your dog. When ticks feed on a specific animal, the animal becomes infected. During the feeding process the ticks transmit the microorganism Rickettsia into the bloodstream of the animal they are feeding on, thus transmitting the disease. In case of the tick fever, when the brown dog tick or the Lone Star tick feeds on the blood of the dog, they transmit the Ehrlichia species into the dog’s bloodstream. Ehrlichia has a tendency to stay alive in the tick for a period of 5 to 6 months before it needs to be passed on to another host.

When a tick carrying Ehrlichia bites a dog, it will immediately injected saliva into your dog’s blood. The saliva of ticks not only possesses an anesthetic effect (this prevents the dog from realizing the presence of an intruder on its fur, while the tick quietly drinks away the blood), it also has a very hard cement like material which allows the tick to stay stuck to the dog’s skin. Tick’s saliva also contains an anticoagulant which prevents the dog’s blood from clotting and allows the tick to continue feeding for days.

This is definitely not good news for your dog or any dog whom the tick decides to make its prey. It only takes a few hours, (approximately 3 to 6 hours) for the microorganism Ehrlichia to get transmitted from the tick’s saliva into the bloodstream of the dog. Unfortunately, a single bite is enough for the dog to get infected.

Once the microorganism is present in the bloodstream of your dog, it tends to multiply and spread to other parts of your dog’s body. From the point of the causative organism’s entry into your dog’s bloodstream, it can take around 8 to 20 days for your dog to start showing the first signs of being infected by tick fever.

Signs and symptoms of tick fever

The symptoms of tick fever can present themselves in a very mild manner during the initial stages. Tick fever can be primarily be divided into three different stages which I have previously discussed as well:

Stage I: The acute phase

This is the earliest stage of tick fever infection. During the stage most dogs will only show the following mild signs:

The acute phase generally lasts from about 2 to 4 weeks. During this time the dog may also seem to start recovering until he or she starts showing symptoms of the next stages.

This is the second phase which comes after the acute phase. During this stage the microorganism is definitely present in your dog’s bloodstream, but it does not show any visible signs or and symptoms. All the organisms does right now, is that it takes up residence in your dog’s spleen and remains dormant for a while. This phase can carry on from a period of several months to years during which your dog might appear to be completely healthy and normal. If your dog’s immune system is strong enough, then this would be the stage where your dog will fight off the organism and truly recover from the disease.

This is the final phase of the disease. This will occur if the dog is not able to fight off the infection during the sub clinical phase. The following are the symptoms of the chronic phase of tick fever:

How is tick fever diagnosed?

Tick fever can be very difficult to diagnose. It is specifically harder to diagnose in the early stages of the disease. Most dog guardians will not realize that their dog is suffering from tick fever unless the dog is already in the chronic stages when the symptoms have taken a turn for the worse.

The diagnosis of tick fever is made on the basis of the history of the dog’s exposure to tick previously, the symptoms the dog is showing, a full blood work which would indicate a low platelet count as well as a blood test to check if the dog has specific antibodies against Ehrlichia.

A dog’s immune system generally takes 2 to 3 weeks to start producing antibodies against Ehrlichia. Therefore, blood tests done during the early phase may report as false-negative. Due to this, your vet might recommend you to perform a second test a few weeks later to make sure that the first negative result was really negative.

Thus, the precautionary dog care measure always recommend is that in case you observe a large tick [one which is full of blood] on your pup, first, remove the tick. Following this, you should have your pooch immediately tested for tick fever. If the result comes out as negative, have your pooch tested again after eight weeks of finding and removing the tick.

How is tick fever treated?

The method of tick fever treatment primarily depends on the symptoms the dog is showing and the severity during the time of diagnosis. If the dog is suffering from severe bleeding issues, he or she might need hospitalization, IV fluids as well as blood transfusion to help him/her become strong enough to start the treatment against Ehrlichiosis. If your dog is suffering from an kind of ocular inflammation caused by ehrlichiosis, corticosteroids might be the drug of choice to help reduce inflammation in the eyes.

The only way available of getting rid of Ehrlichia is to administer a full antibiotics course. The primary drugs of choice for the treatment of tick fever are Tetracycline as well as Doxycycline. These are usually given for a period of three weeks to a few months.

As is the case in most diseases, and early detection and treatment greatly increases the dog’s chance of surviving through the tick fever. Dogs who otherwise have a healthy immune system can be expected to make a complete recovery even though they may be susceptible to reinfection later.

Order dogs who do not have a strong immune system, or those who suffer from bone marrow issues may have a harder time recovering from tick fever. It has been observed that breeds like Doberman Pinschers and German Shepherds have increased reaction towards tick fever and a poor prognosis compared to other dog breeds.

Fortunately, if your dog recovers from tick fever, you can stay sure that he or she will lead a normal and healthy life. However, you must take all tick related precautions to prevent your dog from getting infected by a tick again.

How can you prevent tick fever? Are there any vaccines available?

Unfortunately, at this moment there are no vaccines available to prevent Ehrlichiosis. However, as a dog guardian there are a few steps you can take to prevent your dog from coming in contact with the tick altogether.

Check out this blog post to know about 32 different types of tick prevention strategies and home remedies. There are many ways you can protect your pup from getting infected by tick. A few of them are as follows:

You can use veterinary spot treatments which are normally placed under your dog skin. These will not only repel the ticks which come in contact with your dog, they will also kill the tick which might be present on your dog’s fur already. Make sure to consult with your veterinarian first about which product would be safe for your dog depending on your dog’s health and immune conditions.

You can use tick repellent like homemade ticks sprays, anti-tick shampoos as well as dips.

Focus on treating the corners of your house, the furniture and lawn with anti-tick treatments. You can also use diatomaceous earth for getting rid of both fleas as well as ticks.

Keep your yard inhospitable to ticks by use of pesticides. Remember to consult with your vet before you choose a pesticide so as so as to make sure that the pesticide does not harm your dog.

Check your dog after every walk. Comb thoroughly through his or her fur to remove any tick which have gotten attached to your pup.

Can humans get tick fever from dogs?

The good part about this is that you cannot catch Ehrlichiosis from your dog. However, there is a chance that you can catch the dreadful disease if the infected tick comes and bites you. Therefore, preventing tick infestation on your dog as well as your house is the best way to go. Ticks have a very thick exoskeleton (outside shell) which makes it hard to kill them manually. Therefore, keep a strict eye out for any tick activity around you or in your environment.

The primary thing to remember here is that the longer the tick remains attached to your dog, the higher the chance that your dog will develop tick fever. Hence, if you find a tick on your dog, especially an engorged one [a tick who has fed on blood and increased in size], remove it immediately with the help of a pair of tweezers and contact your veterinarian. Remember to get your dog tested immediately and 8 weeks later as well just to be sure that your dog is not suffering from tick fever.

Have you ever faced a situation like this? What antibiotics and supportive care did the vet advice for your pup?  How long did it take for your pup to recover? If you have a specific story or anecdote about your dog that you wish to share with everyone. I would love to feature your story on my blog.