A dog guardian’s complete guide to understanding mange in dogs: the different types, the symptoms of each and the remedies

Mange is a dreadful condition which has been known to affect dogs. If you have been following dog news, you would know what mange looks like. Mange is a pretty common skin disease commonly observed in puppies and dogs who live on the streets, are abused or are completely neglected by their guardians. These dog’s skin do not have hair, is covered with crusty patches or scabs. Most often these dog’s skin is described as having a look of stone. Read the entire blog post to know all that you must know about mange in dogs: the causes, symptoms as well as available treatment options.

Mange is a pretty horrible and painful condition. However, it is not untreatable. Even the serious cases of mange can be treated effectively with the right kind of medication.

Sacroptic mange is a very contagious skin infection which affects dogs. This is caused by the sacroptes scabiei mite. These mites have been observed to form a burrow through the skin. It is the formation of this burrow or hole which causes the intense irritation and itching to the dog. The constant scratching due to the irritation is what leads to the falling off of the dog’s hair.

The only good thing about mange is that it is treatable. However, mange can get transmitted to other animals as well as to humans. Therefore, it is advised that the dog who is suffering from mange be kept in a quarantine, away from other animals or humans. 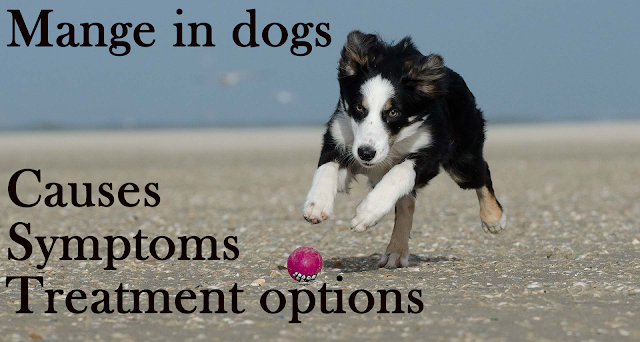 What causes mange in dogs?

The most common way in which a dog can get infected by mange is by coming in contact with another animal who is already suffering from mange. The mites have a tendency to move very quickly from one animal to another. Places like dog houses, animal shelters, veterinary clinics and groomers have a high exposure to mange. If a dog visits these places where mange infestation is high, it increases the chance of the dog getting affected by mange. It takes around 2 to 6 weeks from the time of infection before the dog starts to show the symptoms of mange.

Dogs can also pick up mites from dirty toys, bedding or grooming tools which have been used on a dog suffering from mange like scissors, brushes or combs.

The chances of the dog getting mange from dog park is less because mange mites have not been observed to survive very long the open environment. However, this is not impossible.

Species of mites which cause mange in dogs

There are many species of mites which can cause mange in case of dogs. However, sarcoptes scabiei is the worst of the lot. It causes intense itching in dogs and leads to an allergic skin reaction. If this mite infects humans, it will only survive five days. However, the itchy skin rash can continue for several weeks.

There is another type of mite called Cheyletiella. It is sometimes referred to as walking dandruff. This might is of an off white coloration. It tends to give an appearance of dandruff on the dog’s body where the mite lives on the skin. These mites have been observed to live on the surface of the skin or close to it. This type of mange used to be very common when straw bedding was used for dogs. However, with the advent of the commercial dog beds, this mange case is much less observed.

This mange is mainly caused by Demodex canis mite. This mite mostly infests adult dogs but is never able to cause disease symptoms in them. This is because the strong immune system of adult dogs can easily fight off the mange. However, in case of puppies, due to the lack of development of a proper immune system, they are more vulnerable compared to their adult counterparts.

Puppies mostly get mites from the mother due to cuddling in the initial days after birth. Overall, it is not a huge problem for puppies either. Some pups who may suffer from mange usually recover on their own without the need of treatment.

However, if the puppy belongs to breeds like Shar Pei or the Old English sheepdogs, he or she might be more vulnerable to developing demodectic pododermatitis. This is a mange condition which affects the feet of the dog. It has the tendency to become chronic despite of administration of the best possible treatment.

What are the symptoms of mange?

When you look for mange on the skin of your dog, you may or may not be able to see an actual mite, but you will be able to identify its presence by the following signs on your dog:

If your dog is suffering from an advanced case of the sarcoptic mange, he or she might develop wart like red bumps (referred to as papules) on the skin due to the chronic inflammation.

None of the other skin conditions which dogs suffer from can cause as much itching as mange. The constant biting, scratching and itching just worsens with the progression of the disease. The franticness increases and starts to interfere with your dog’s normal behavior like sleeping and eating.

Mange also makes it extremely hard for your dog to get a good nights sleep as that is the time when the mites are highest in action. The mites which cause scabies are particularly active at night and use this time to aggressively burrow and reproduce. This exacerbates the inflammation of the skin and leads to further itching in dogs. In worse case scenarios, the itching and scratching may cause the sores to get infected and start the production of yellow-colored crusts.

Bad odor is a characteristic mange sign in dogs. The unpleasant smell is not due to the presence of mange. It is due to seborrhea. Seborrhea is a complication of mange. It occurs due to the overgrowth of yeast and bacteria which feed on the sebum present on the irritated skin.

If mange is not treated at the right time, it can lead to poor health of the dog over time. Eventually, if left untreated, mange will spread all over the dog’s body and start to show symptoms like

Death might also occur in severe cases if the condition is untreated.

How is mange diagnosed?

Once your veterinarian has ruled out any kind of bacterial infection of the skin, food allergies etc. your vet may conduct a thorough physical examination of your dog to identify if there is a mange causing mite present on the skin.

Dogs suffering from the nonseasonal form of sarcoptic mange will be administered scabicides (a drug which can kill the mite) like Amitraz. However, Amitraz can be toxic to dogs. Hence, the veterinarian’s instructions on the dose and duration must be strictly followed.

Treatment of such a condition must be done under strict veterinarian instructions. In serious conditions, the dog may need scabicidal baths once a week for a period of six weeks to eliminate all the mites.

For your dog to completely respond to the therapy, it might need a duration of 4 to 6 weeks. Due to the contagiousness of this disease, it is best that your dog is kept away from any other animal or human while he or she is recovering.

Once the dog has been properly treated, this disease should get completely cured. If your dog has a healthy immune system, he or she will have a higher chance of protection against mites. Therefore, provide your dog with quality multivitamins and immunity boosters to keep his or her immune system in pristine condition.

This type of mange is more difficult to treat compared to the others since these mites burrow deep into the skin of the dogs. The first order of treatment for sarcoptic mange is to properly shampoo the pup with a shampoo containing benzoyl peroxide to help open the pores in the skin. Following this, the pup will be treated with Amitraz, lime-sulfur, selamectin, milbemycin or any other insecticide drip. These dips will be conducted every week for a period of at least 6 weeks or until the symptoms start to show improvement.

The best treatment for dogs suffering from Cheyletiellosis is to bathe the dog weekly to help remove the dry scales. The bathing is to be followed with insecticidal rinses every week for up to a period of 6-8 weeks depending on the symptoms. The most common dips for treating this condition are pyrethrin shampoos or lime-sulfur dips. Depending on the dog’s condition, the vet may also recommend other treatment like Amitraz, Selamectin etc.

Exercise caution when using Ivermectin for treatment of mange:

Despite of Ivermcetin being the most common drug for treatment of mange in dogs, it has some serious side effects. Ivermectin has been observed to cause death in case of dogs suffering from the MDR1 gene mutation. The presence of this gene causes the Ivermectin and some other medications to accumulate in the brain of the dog leading to neurological complications like blindness, disorientation or tremors.

The dogs who have been observed to have this mutation mostly belong to breeds like Australian Shepherds, Shetland Sheepdogs, Border Collies and German Shepherds. If your pup belongs to any of the breeds mentioned here, your vet might decide to first conduct a genetic test before starting medication.

How can you help your dog at home?

Even though your dog may still experience symptoms, you can follow through a few treatments at home to reduce your pup’s discomfort:

Give your dog a natural shampoo bath which contains oatmeal. Oatmeal helps to reduce itching.

Apply garlic oil to the affected regions on your dog’s body. Garlic oil has antibacterial properties which repels mites due to the presence of sulfur.

Remember to keep your house, garage and backyard free of pests and mites.

What happens if humans get infected?

Humans who come in contact with the dog suffering from mange may contract the disease. The primary symptoms of mange in humans are development of purple-colored rashes on the abdomen, chest and arms. If you feel a constant itching and develop rashes, do not delay in consulting your doctor.

Mange is most often a difficult to treat condition but it is not impossible to cure. If you feel your puppy is suffering from mange, do not delay in taking him or her to the vet as soon as possible. Early detection means early treatment and less worry for you. If you find this article informative, subscribe to the blog, so I can send you the newest articles directly to your inbox.