This blog post focuses on helping you understand the causes behind Lyme disease in dogs, the symptoms, the treatment as well as preventive home remedies.

Lyme disease is one of the diseases transmitted by ticks amongst a variety of other tick related diseases which affect the canine population. Lyme disease is caused by a spirochete bacterium known as Borrelia burgdorferi. The primary mode of transmission through tick bites. It has been observed that only about 5 to 10% of the affected canine population actually developed the symptoms of the disease. So, there is a chance, that a lot of dogs may have been infected by Lyme disease but may have been asymptomatic [not showing the symptoms of the disease].

Since the first case of this disease occurred in Lyme, Connecticut in the year 1975, it has been named as the Lyme disease. This disease is hard to diagnose and can cause serious health issues to your dog. 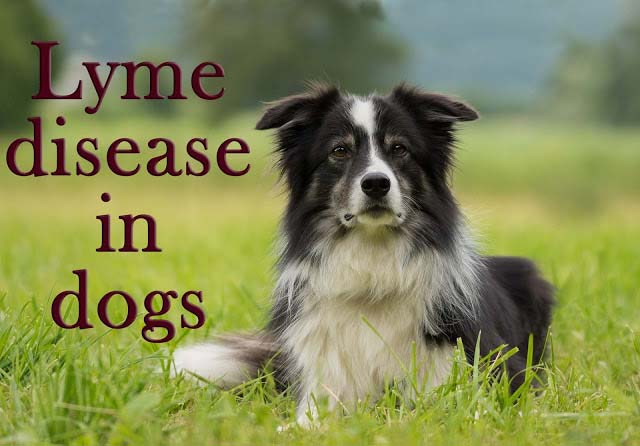 Once the tick is attached to your dog’s skin, it will take the tick at least 1 to 2 days (24 to 48 hours) transmit the bacteria which causes Lyme disease. Therefore, the earlier the tick is removed, the higher is the chance of recovery of your pup.

Ticks have not been observed to either fly or jump. They can only crawl from one place to another. Then how do ticks infect dogs? Ticks normally stay at tips of vegetations and bushes. When your dog comes in contact with the bush tips, the tick immediately latches onto your dog and crawls over to find a nice place to bite.

Check out these other tick related diseases in dogs.

The ticks have generally been observed to prefer certain kind of creatures like white footed mice or deer whom they need to complete certain stages of their lifecycle. However, this does not mean that they are not willing to bite your dog or you. In case the tick is harboring the bacteria in its body, it can infect both dogs and humans by a single bite.

The risk of transmission of Lyme disease is the highest during the tick months which are from June to October. During this time, the nymphs and the adults are actively trying to find hosts, which puts you and your dog in the vulnerable category.

The risk of transmission of Lyme disease to humans have been increasing. In the last two decades, the number of cases reported by Centers for Disease Control [CDC] has doubled to about 30,000 every year. Even though the chances of the tick biting humans and dogs is almost equal, dogs are at higher risk if they are living on farms or if they live in regions which have a lot of wooded areas.

Symptoms of Lyme disease in dogs

Lyme disease is a pretty common disease observed in canines. Unfortunately, the signs and symptoms of Lyme disease are harder to detect in case of dogs compared to humans. In humans people suffering from Lyme disease develop a bulls-eye – the bite site which is a characteristic of this disease. This rash develops within the span of 3 to 30 days. The site specific rash can be used as a way to diagnose the disease. However, in case of canines, the absence of this rash makes the diagnosis of this disease pretty difficult.

The following are the most common symptoms of Lyme disease observed in dogs:

The lameness primarily occurs due to the inflammation of the joints. It may last for a period of 3 to 4 days and then recur a few days or few weeks later, either affecting the same leg again or any other leg/legs. These symptoms are primarily referred to as shifting leg lameness. Your dog may suffer from swelling in one or more joints.

Other symptoms observed in this disease:

Lyme disease has also been observed to cause kidney damage in dogs. This mainly occurs as a result of a severe infection. The primary effects observed are:

If your dog is starting to exhibit signs like diarrhea, appetite loss, increased levels of urination, elevated thirst, vomiting, swollen limbs as well as abnormal fluid buildups, take your pup to the vet immediately. These might be the signs of your dog’s kidneys shutting down.

Can Lyme disease be fatal to dogs?

Lyme disease can affect your dog’s kidney, causing them to stop functioning. Under these circumstances, the disease most often takes a fatal turn for the dog.

Diagnosis of Lyme disease in dogs

When you take your dog to the pup there are a few questions he or she will first inquire about:

Your vet may conduct a thorough physical search for the tick in your dog’s fur. He or she may need to shave certain areas of the dog’s body in case your dog has thick matted fur or is endowed with a double coat fur layer. Once the tick has been isolated, it will be sent to the clinical laboratory for diagnosis of the tick species. Since ticks cause seven variety of disease in dogs, it is of utmost importance to identify the tick species which has bitten your dog before starting the antibiotic therapy. Antibiotic treatments may differ depending on the kind of microorganism that has infected your dog.

Since tick related antibody tests can take up to 4 to 6 weeks to actually show up as positive after exposure to the tick, your vet may use a combination of different diagnostic techniques to diagnose the disease your dog is suffering from:

Treatment of Lyme disease in dogs

Since Lyme disease is primarily caused by bacteria, it is treated by the administration of antibiotics. The primary antibiotic of choice for treating all tick related diseases are Doxycycline followed by the antibiotic Amoxicillin and then Azithromycin. The treatment duration generally last for about few weeks. Longer antibiotic course may be necessary depending on the condition of your dog. In case your dog is suffering from swollen joints, your veterinarian may prescribe some anti-inflammatory drugs as well. Depending on the condition of your pup, he or she may need hospitalization and supportive care.

The unfortunate part about this disease is that the antibiotic treatment is not always completely successful in removing the infection. The symptoms of Lyme disease may return later or may even manifest themselves as kidney problems in your dog. The proper administration of antibiotic treatment reduces the chances of this happening. However, you must be careful in future and keep a close eye on your dog if he or she has had a previous episode of Lyme disease.

Once the antibiotics have been administered, you should see a sudden improvement in the joint inflammation 3 to 4 days after starting the treatment. If you do not observe any improvement after a span of 3 to 5 days of starting treatment, consult your veterinarian again. Your dog might need a reevaluation.

How can you prevent Lyme disease in dogs?

Tick avoidance plays a huge role in controlling Lyme disease in dogs. Keep your house, backyard, garage and surrounding areas tick free. There are vaccines available against Lyme diseases. Make sure your dog is up to date on the vaccination schedule. If you live in a wooded region, you can use pesticides to kill ticks. However, consult your veterinarian before you start using any kind of pesticide to make sure that the pesticide won’t harm your pup.

During the peak season, regularly bathe your dog in an anti-tick shampoo, comb your dog thoroughly after every walk or hike, get your dog tested immediately and 4 to 6 weeks later if you see a tick on your dog etc.

Check out these 32 herbal remedies to keep ticks away from your dog.

What is the right way to remove a tick from a dog?

If you observe a tick stuck your dog’s skin, do not try to remove it with your bare hands. Since Lyme disease can be transmitted to humans via infected ticks, you should be very careful when removing a tick from your dog. Always use latex disposable gloves before you remove the tick from your dog’s body. Take a pair of tweezers and some alcohol solution or sanitizer.

Remove the tick from your dog’s body, make sure to get the head as well. Drown the tick immediately in the solution of alcohol or sanitizer to kill the tick. Ticks have a very hard exoskeleton, so do not try to crush the tick between your fingers. You can however, crush the tick between solid surfaces. There are commercial tools available in the market for tick removal which can be used for this purpose. Be very cautious when removing the tick. Do not jerk or break off the tick. If the tick is broken off, there might still be part of the tick which remains attached to your dog and continues to spread the infection.

Remember to keep your dog’s vaccination up to date and use as many tick preventive measures as possible after a consultation with your veterinarian. What do you do to eliminate tick problem from your house and surrounding area? Has your dog ever suffered from any tick diseases? How did you help your pup? What antibiotics were administered to your dog? I would love to know your stories and anecdotes please put them down in the comment section below. If there’s a specific story you want to share with the world, feel free to contact me on any of my social media channels.