How to quickly and precisely reduce bleeding in dogs in case of an emergency?

Dogs play rough. I am yet to see a dog who prefers to sit and play with his siblings when healthy. Usually there is a lot of teeth and paws involved. Under such circumstances there are bound to be cut and bruises resulting in bleeding. The dog’s legs and paws are vulnerable to injury from nails or other sharp objects, and they will heavily bleed if cut. Dog’s ears also bleed heavily when injured because the skin over the ear is very thin. Bleeding in dogs can be fatal if not brought under control soon.

What do you do in such a situation? A blood loss of even two teaspoons per pound of body weight can cause your dog to go into shock. The primary signs of shock are:

If the bleeding is not stopped soon enough, it may even cause death. Thus, it is imperative for every dog guardian to know how to stop or at least get the bleeding under control for a time long enough to get your dog to the vet.

Bleeding can be internal or external. For internal bleeding, professional help will be required. However, you can bring the external bleeding under control because it usually happens from a skin wound.

In this blog post, I will discuss how to stop external bleeding until you can get to your vet. 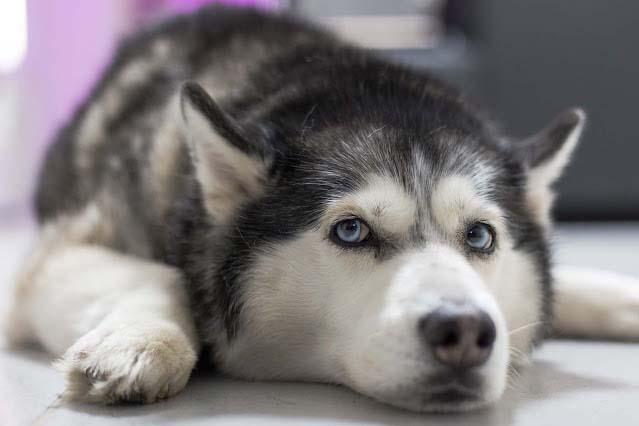 Initial steps to stop the wound from bleeding

Apply a direct and gentle pressure on the wound

The first step to stop a bleeding is to apply direct pressure on the wound. For this purpose, place a clean cloth or gauze directly on your dog’s wound and apply firm yet gentle pressure allowing the blood to clot. Once the blood has clotted, do not disturb the clot.

If you observe blood soaking through the compress, do not remove the compress. Place a fresh compress or gauze on top of the old compress and proceed to apply pressure. If there is over one injury, tie the compress with bandages. If you do not have a compress at your home, use your hand or finger and apply gentle pressure until the clot forms.

You must wash your hands before you tend to your dog and after handling body fluids like pus or blood. It is preferable to use gloves if available.

In case the wound is on a foot, paw or the leg is bleeding severely, make sure the leg is elevated and the positioned at an angle above the heart. Doing this will allow gravity to minimize the flow of the blood near the wound which will reduce the bleeding and allow clot formation. This method of elevation works best in case of big dogs with longer legs because there is more distance between the injury and the heart.

Once you have elevated your dog’s leg, make sure you are applying direct pressure and compress on the wound for maximum effectiveness.

Precautions you must take before you start to help your dog

There are certain precautions which must be followed before and while taking care of your dog.

Wrap the injured paw in a towel or a gauze and apply constant pressure. The bleeding should stop within 5 to 10 minutes. If the bleeding is occurring due to a broken nail, you can apply a silver nitrate steak or some cauterizing powder on the nail. In case silver nitrate or cauterizing powder is not available at your home, use baking powder or flour and cover up the injured nail with either of these. Make sure to keep the food wrapped in a towel until you can get to your veterinarian.

In case the foot is bleeding due to a torn foot pad or a deep cut, thoroughly check the foot for any kind of foreign object or debris. If you find a foreign object lodged in the foot, grasp the object with a pair of tweezers and very gently remove it from the foot. Keeping the paw under running water can also help remove small fragments lodged in the pad.

To stop the bleeding, apply pressure on the wound with a clean towel or gauze. Small cuts will stop bleeding soon. However, if you cannot stop the bleeding within 15 minutes, take your dog to the emergency vet clinic as soon as possible.

Procedure to stop the bleeding from dog’s leg

In case, the cut is minor, check the leg for the presence of any foreign body lodged in them. Remove the fragment if it is reachable. Flush the wound with water, remove the small debris and cover the wound with a clean gauze or towel. Preferably tape the gauze around the leg until you can reach your vet’s office.

To treat a major cut, apply firm pressure on the same with a clean towel. Keep the leg elevated, preferably above the level of the heart to slow down the blood flow to the leg. As mentioned above, if the towel becomes soaked, do not remove the towel. Just place another clean towel on top of the soaked one.

Procedure to stop the bleeding from dog’s torso

In case the cut happens on the torso (abdominal wall or chest), it will be difficult to keep the towel in place. Under such circumstances, you may need to tape the towel to keep in place. For this, wrap the towel with 3 to 4 layers of tape. Make sure to not tape the towel too tightly as it can restrict breathing, Use a hand towel, if your dog is of a small breed and a bath towel, if you have a large breed dog.

In case you hear your dog make sucking noises while breathing, keep the towel in place and immediately proceed to the emergency clinic. Some chest injuries may involve the lungs and can be potentially fatal. In case you notice an object protruding from the chest or abdomen, do not try to remove it. Instead, wrap the towel around the foreign object without disturbing it and immediately proceed to your vet.

Procedure to stop the bleeding from dog’s ears

Ears tend to bleed heavily as there are a lot of blood vessels on the ear flap. Also, the habit of vigorous head shaking in dogs makes this situation a lot worse. Thus, even in case of a minor wound you may find profuse bleeding from your dog’s ear.

Put a small towel or gauze on your dogs ear. Following this, fold the ear in top of your dogs head. Secure the towel in place by wrapping it with a tape. Make sure that there is a space of two fingers in between the neck and the bandage so that your pup’s breathing does not become restricted in any manner.

What to do in case your dog is bleeding internally?

If your dog shows any of the above signs, take him or to the vet without delay. Every second counts in such situations Your prompt action can save your pup from a lot of discomfort.

Buy and store the following things at your home so that you can take immediate care of your pup in emergency situations:

Have you ever had to face such a situation? What did you do under such circumstances? Do you have any tips on stopping dog blood loss? If yes, kindly put it in the comments for all dog guardians to know.

Thank you for reading my post. I would be grateful if you can share this information with other dog guardians. Every dog guardian must be aware of emergency first aid procedures to be followed in case of bleeding in dogs.