When you decide to adopt a puppy, the desire to adopt two puppies at one go is valid. Training two puppies together seem to be an easier job than training them one after the other. However, as a responsible dog guardian, there is something you should be aware of. It is the littermate syndrome. 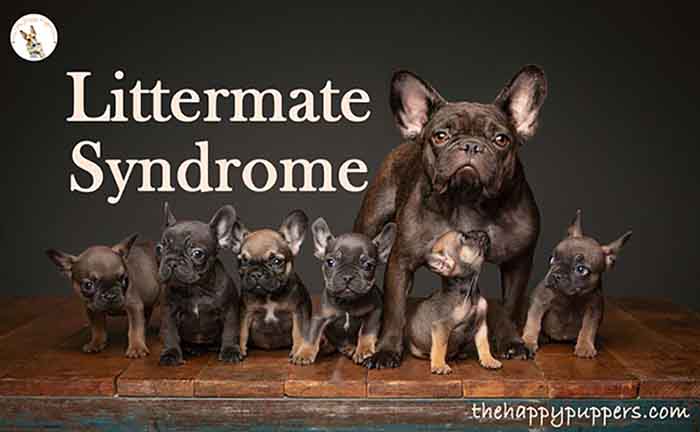 When dog guardians adopted two puppies together, sometimes the opposite of what they thought originally (easy to train, will get along well with each other, etc.) proves to be true. It is understandable that you wouldn’t want to separate the siblings and bring only one home.

However, there is an unfortunate truth as to why it is not advisable to get two puppies from the same litter. Raising puppies who are siblings can be a huge challenge for the dog guardians because the pups belonging to the same litter may start to show behavioral issues which are collectively referred to as littermate syndrome.

If you are interested in knowing more dog care tips or gaining more insight into dog psychology, training, behavior, and care, feel free to subscribe to the blog so that I can send you the latest article directly in your inbox.

Do dogs recognize their siblings?

If the two dogs get adopted by different families or are separated, then they tend to forget each other’s scent after a while.

However, when dogs belonging to the same litter are living together, they can recognize each other’s scent even after growing up. Just as is seen in the case of humans, puppies of the same litter bond with one another right from the start. This bond either weakens or strengthens over time. This connection is the reason behind the misbehavior observed in the case of puppies who have littermate syndrome.

What is littermate syndrome?

Littermate syndrome is also referred to as littermate aggression or sibling aggression. This is a non-scientific anecdotal term that has been used to refer to the collection of behavior issues that has been observed in the case of canine siblings if they are brought up in the same house after the age of 8 to 10 weeks.

The primary definition of littermate syndrome is behavioral issues occurring in dogs when the puppies get adopted from the same litter into one family. The puppies develop a strong attachment to one another. The bond or attachment to one another is so strong that it starts to interfere with the ability of the puppies to interact with other people as well as with other dogs in a normal manner. The puppies fail to understand how they should behave or respond when they are not together.

This mainly happens because the littermates bond very strongly with one another. It is due to this bonding that they fail to develop any kind of connection with their human family. The connection which forms between the two puppies makes it impossible for them to reach the full potential of good behavior. Puppies with littermate syndrome tend to only interact with one another and over time they become highly dependent on each other for normalcy as well as safety.

Littermate syndrome is not breed-dependent. It can affect dogs belonging to any breed. It can also affect unrelated puppies if they are adopted at the same time and are raised together and are close in age.

In the case of the littermate syndrome, one of the two puppies will become shy. This happens even if both the puppies were initially outgoing and bold. This poses a huge problem since the shy puppy is never able to reach his or her full potential in training as well as behavior.

The good news about this whole fiasco is that it is not necessary that all puppies who have been adopted in pairs will naturally develop littermate syndrome. If the dog guardians use specialized training methods, the littermate syndrome can be avoided.

What are the symptoms of littermate syndrome?

One of the easily identifiable symptoms of littermates syndrome is the fearfulness of the puppies towards unfamiliar dogs, people, or any unknown stimuli. Such puppies display heightened levels of anxiety if they are separated from each other for even a short period of time. None of the puppies are able to reach their complete potential in terms of training and obedience skills. In some cases, it has been observed that the two pups will constantly indulge in fighting.

Let’s discuss a few symptoms of the littermate syndrome in further detail:

Fear of anything unfamiliar:

Puppies with littermate syndrome will avoid interaction with anything new, be it new people, dogs or things. Such puppies will either become very quiet and still if you approach them or they may growl, snap or bark when they are presented with new situations or things.

High levels of anxiety when separated from one another

Puppies with littermate syndrome will display behaviors like panting, pacing, barking, whining, or destruction of property if they are separated from their sibling. Such puppies have high levels of separation anxiety

Will not eat if left alone

Dogs with littermate syndrome will not eat if the sibling is not around. He/she will keep looking for the sibling and will start eating once the sibling comes back.

Since the puppies are distracted by one another, training the two puppies belonging to the same litter will take longer than you may have initially thought.

Related posts:
TRAINING RESCUE TERRIERS
WHY IS AGILITY TRAINING IMPORTANT FOR YOUR DOG?

Fight with each other

Once puppies with littermate syndrome reach the social maturity stage, they start fighting with one another. Most often these fights are pretty severe and can cause injury to one of the pups, mostly the submissive one.

According to certified dog trainers, it is not recommended to get to puppies within a period of six months. This increases the chances of littermate syndrome. Even if the two puppies do not belong to the same litter but are brought up together, there is a high chance that they will exhibit littermate syndrome.

CARING FOR A NEW PUPPY? 10 TIPS TO BECOMING AN AMAZING DOG GUARDIAN

Challenges faced by the guardians in the case of littermate syndrome

Puppies with littermate syndrome develop separation anxiety due to being extremely attached to one another. Since puppies who have littermate syndrome most often crave each other’s attention, they fail to understand how to play, communicate or socialize with other canines or humans. Over time, this absence of socialization leads to aggression and fear in the pups when they are exposed to other dogs on humans.

As I mentioned before, puppies with littermate syndrome or hyper-focused on one another. This leads to them not engaging enough with their guardians. As a result/puppies failed to develop and learn the correct socialization skills with humans as well.

Another challenge is training. Since the puppies are almost always focused on one another, it is very difficult for the dog guardians to get their attention to train them properly. Therefore, teaching even the basic skills to such puppies becomes a huge challenge compared to if the training is done one pup at a time.

WHY DO DOGS LICK YOU? 5 REASONS | HOW TO STOP SUCH BEHAVIOR?

At what age does littermate syndrome start?

Littermate syndrome can easily be identified in poppies within a week or two of them arriving at a new home. If you notice that your puppies are giving more attention to each other than they are to you, it is a clear-cut sign that the puppies have littermate syndrome and you have your work cut out for you.

Can littermate syndrome be cured?

Theoretically, it is possible to cure littermate syndrome. However, it is impossible in real life. Even guide dog raisers find it hard to prevent littermate syndrome from developing if the puppies have been taken from the same litter.

However, if you do land up with puppies of the same litter, the two puppies need to be cared for as well as crated in different places. They should get separate walk times, training duration as well as play duration with the guardians. Such puppies must have more interaction with their guardians compared to each other. However, this increases the amount of work that the guardian has to do as well as reduces the potential benefits (puppies providing each other company) which the guardian had thought when adopting the two puppies together.

To successfully raise sibling puppies, you must follow the following steps:

Get two crates. Do crate training for both the puppies. Allow the two puppies to be in the to create side-by-side initially. Slowly start to move the crate away from one another. Do this till the pup in one crate cannot see the other crate.

It is preferable that the two crates be kept in separate rooms. Take your dogs outside at different times. Train the two dogs separately.

Take your pups out for separate socialization sessions with other dogs. Do not take the puppies out together. Take only one puppy out at one time for socialization practice. As the puppies learn to adjust to socialization and staying away from their siblings, use rewards and treats as a positive reinforcement to encourage good behavior in your pup.

Allow some puppy playtime as well

Your puppies should train separately, eat separately, sleep separately, go on walks separately. However, you should have a designated time slot when your puppies are allowed to interact with one another. This will help the two puppies get along with each other. You can also try to indulge in playtime with your pups by playing a game of fetch, tug of war, find the treats et cetera

In case you realize that you don’t have the time energy or space to train your pups separately, reach out to your veterinarian, certified dog trainer, or dog behaviorist and seek professional help.

How to prevent littermate syndrome in dogs?

The easiest solution to preventing littermate syndrome in dogs is to not adopt dogs from the same litter. Furthermore, keep a time period of at least a few weeks or months between the two adoptions so that you are done with the training of one puppy before you start with the training of the other.

Have you ever faced littermate syndrome in your pups? What did you do to prevent such behavior in your dogs? If you have any suggestion which you feel has not been included in this blog post, please mention it in the comment section below. If you have any queries pertaining to this blog post or any other blog posts, feel free to reach out to me on any of my social media channels. I will be happy to help.

If you found this blog post informative and would like to receive more information on dog care, training, psychology, and health, please subscribe to the blog so that I can send you the articles the moment they are published.